Has the CBC Violated the Broadcasting Act?

It appears CBC is violating Canadian law. CBC must obey the Broadcasting Act, a law established by Parliament but the Corporation has failed to fulfill a key requirement of the Act. In particular, CBC has made major, inequitable reductions in the staff and budgets of CBC Radio but failed to reveal the plan for these self-imposed cuts. Over $100 million in funds have been surreptitiously transferred from CBC Radio to CBC TV, both English and French, and the effect on radio programming is palpable.
CBC is no stranger to sidestepping rules and regulations. For example, Rex Murphy's weekly commentary on The National is supposed to be clearly identified as Mr. Murphy's opinion. When asked last year how viewers were supposed to know it was Mr. Murphy's opinion, not that of CBC, managers at first claimed a graphic, "Rex Murphy Point of View," appeared during the segment and then sheepishly had to admit that somehow it had been removed years ago. The omission was quickly corrected. The distinction between facts and opinion has gradually been blurred by CBC news, even by Peter Mansbridge, as he not only moderates opinion panels but participates in them. As CBC budgets have gotten tighter, program executives have discovered that facts are expensive to gather, while opinions are free.
CBC has stringent journalistic policies dealing with fairness, balance, etc. One of those policies deals with the on-air presentation of surveys or polls.
The policy on polling appears to have been jettisoned by both CBC radio and TV. Programs like The House, The National, Day Six, Power and Politics and regular newscasts present poll results with little and sometimes no reference to methodology, contrary to policy.
Online surveys are another case in point. They are being used virtually every day by CBC programs-- ignoring the CBC policy that "If programs refer to online questions, the results are reported in a way that clearly indicates it has no scientific validity..." Such surveys are specifically prohibited by the policy from "giv(ing) the results as a percentage, as we normally do with bona fide polls." Yet they all do, in direct contradiction to the policy.
When this was brought to the attention of CBC, the CBC Ombudsman decreed that policy was being breached and suggested that managers take corrective measures. That was almost a year ago and little or nothing appears to have been done.
CBC is not alone in using on-line polls. The Globe and Mail does so but its ombudsman recently acknowledged their limitations. Yet, the Globe can fall short on accuracy and correction. The Globe's TV critic, in a column belittling media criticism in Canada no less, claimed erroneously that the most watched TV newscast in Canada was the CTV local news in Toronto. A promised correction has yet to appear; management can be loath to challenge star performers.
That seems to have been the case with Jian Ghomeshi. CBC has long-established policies dealing with the workplace environment but implementing such policies is difficult. This is especially true if corporate culture subtly coerces employees to refrain from lodging complaints. What are employees to think when the CBC President, reacting to criticism from Sun Media, proudly announces at a Parliamentary Committee in 2013 that not a single case of harassment across the entire CBC was being investigated the day he spoke. The CBC President, of course, was the subject of another embarrassing case of dodging CBC rules when he was caught this year claiming for $30,000 of illegitimate travel expenses.
A more serious situation is the gutting of CBC Radio budgets. According to CRTC data, CBC French TV has managed to keep a budget of about $500 million annually since 2009; CBC English TV has maintained a budget of about $700 million annually in the same 5-year period. That is, there has been basically no reduction in CBC TV budgets. 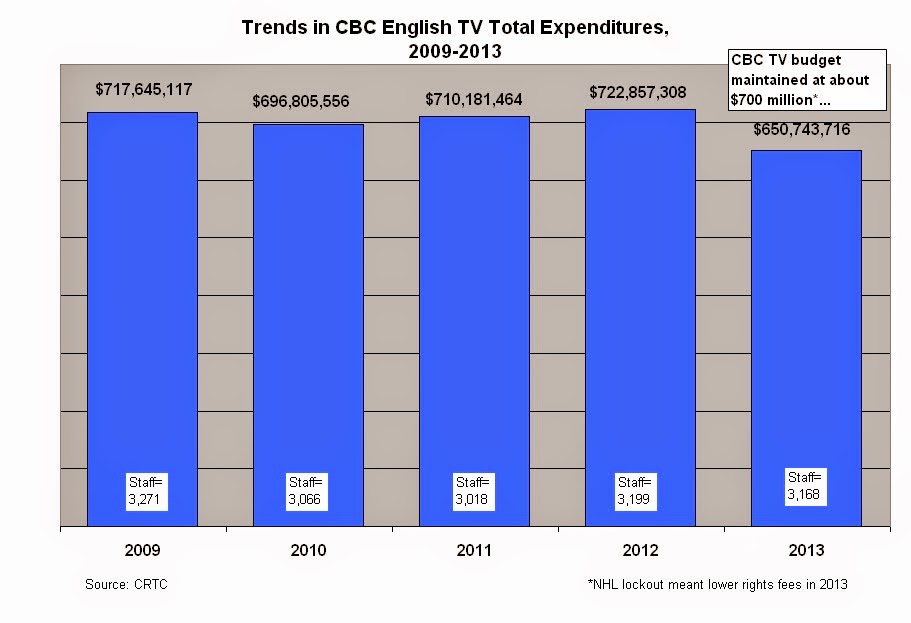 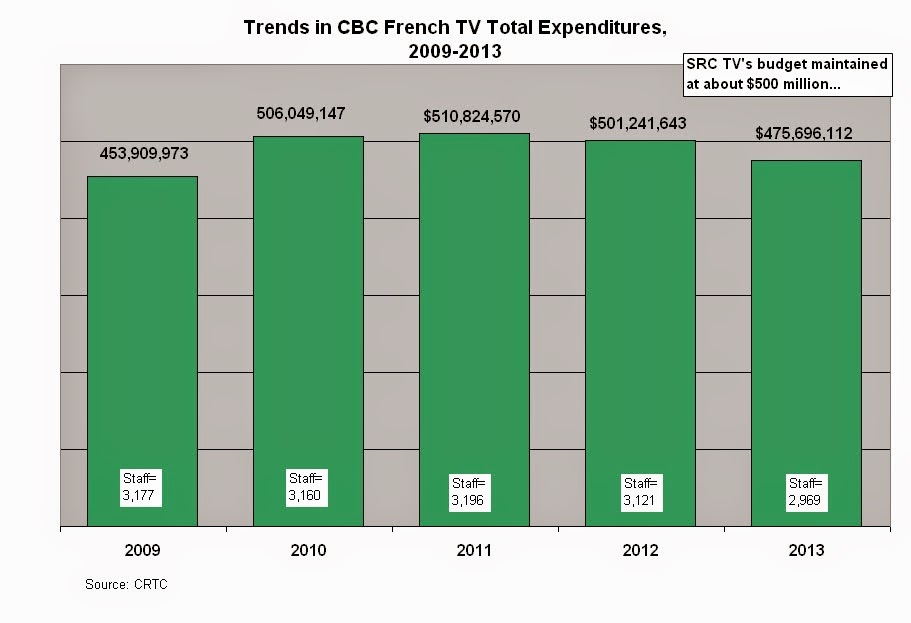 Putting aside the fact that the funds available to French TV seem disproportionate, how has CBC managed to keep TV budgets virtually intact, when ad revenues have been declining and the federal government has reduced CBC's funding?
One can't find the answer in any CBC financial report, including the annual corporate plan. The Broadcasting Act requires the CBC to prepare a corporate plan and a summary of the plan that "shall encompass all the businesses and activities, including investments, of the Corporation and its wholly-owned subsidiaries, if any, and shall set out the major business decisions taken with respect thereto." The summary of the plan requires that the budgets of the Corporation "shall be prepared in a form that clearly sets out information according to the major businesses or activities..." Evidently, CBC has failed to fulfill the requirements of the Act, i.e., the law.
The CBC corporate plan summary of the past five years contained no "clearly set out information" about the four major CBC business activities, English and French radio and TV.  The summary plan is the only information available publicly and to members of Parliament.  MPs and the public had no idea how much CBC planned on spending on TV versus radio or English versus French. Most importantly no information was provided on whether CBC planned on robbing radio to pay for TV. Who knew?
We only learned post facto that CBC planned on achieving its objectives (for TV) by stripping more than a quarter of the funding from its radio services. How? Fortuitously, another law came into effect in 2008 that required CBC and other broadcasters to provide financial data to the CRTC on their major radio and TV operations.
The CRTC data show that while CBC TV services have maintained their budgets, CBC French radio has seen a funding decline of some 35% since 2009 and CBC English radio a decline of some 29%. Staff levels have followed suit. The radio services have been cut by a combined $100+ million, more or less the amount that the government cut from CBC's budget. Is that what Tony Clement wanted, cut only radio and not TV? CBC finds itself in a most precarious situation. Cuts to radio are not enough and so CBC TV has chosen the path of privatization by a thousand cuts, outsourcing sports to Rogers, weather to The Weather Network and documentaries to independent producers. Rather than take the high road and fight for new sources of funding, as CBC President Hubert Lacroix promised when he took the job, CBC management seems determined to keep their heads down and coalesce on the level playing field of private broadcasters.
The stress on the CBC staff perhaps explains the skirting of journalistic policies, the failure to implement basic human resource policy and, more importantly, the fudging of financial data. But these are ingredients for disaster. CBC, especially CBC Radio, remains an essential service but years of mismanagement and funding shortfalls are starting to affect programming and Canadians are slowly losing a cultural touchstone. Something drastic needs to be done.

A version of this article was published in Huffington Post.
Posted by Barry Kiefl at 08:35