Do Conservatives Think CBC is Important?

For the past decade CMRI's Media Trends Survey, the only survey in Canada that has tracked attitudes toward TV and other media continuously in this period, has asked Canadians to rate the importance of CBC TV and radio to Canadian culture.  Other cultural organizations are rated each year as well, including Telefilm, NFB, the NAC and the National Gallery.  Generally speaking, most Canadians don't speak ill of our cultural icons.  In 2011 CBC TV and radio had one of their most positive ratings in the ten years of the Media Trends Survey.  But what level of support does CBC receive from supporters of the three main political parties?

It turns out that CBC TV and radio are not hated after all by the majority of Conservatives, which runs counter to what one might think after reading some conservative blogs or listening to talk radio stations.  A  long time ago I learned from research that those who write to newspapers or blogs or call talk radio stations are not actually representative of the average reader or listener.  Likewise, the often engaging hosts of talk radio or Sun TV News are not representative of all Conservatives.  James Moore, Minister of Heritage and rumoured to be a fan of CBC, is probably reflecting the views of most Conservatives (and other voters) when he supports CBC.

About 1 in 5 people who voted Conservative in the last election don't think CBC TV is important compared to less than 1 in 20 who voted Liberal and an infinitesimal number of those who voted NDP. 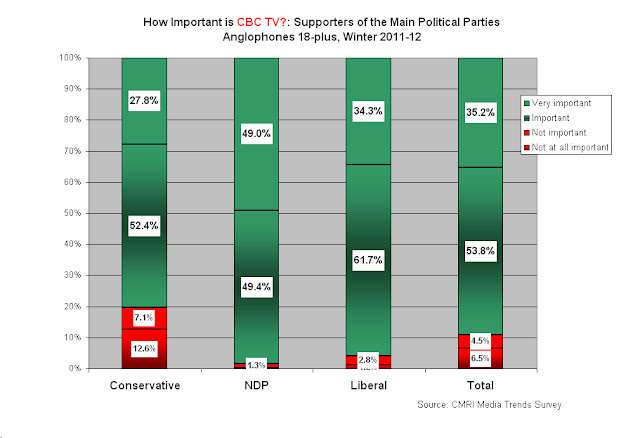 Of more concern to CBC is that the core group of Conservative supporters who give a thumbs down to CBC radio is larger, more like 1 in 3 Conservatives.  Relatively, support for CBC radio is much higher among Liberals and NDPers. Noteworthy too is that almost half of NDP voters indicated that both CBC TV and radio were 'very important', larger than the proportions in Liberal or Conservative ranks. 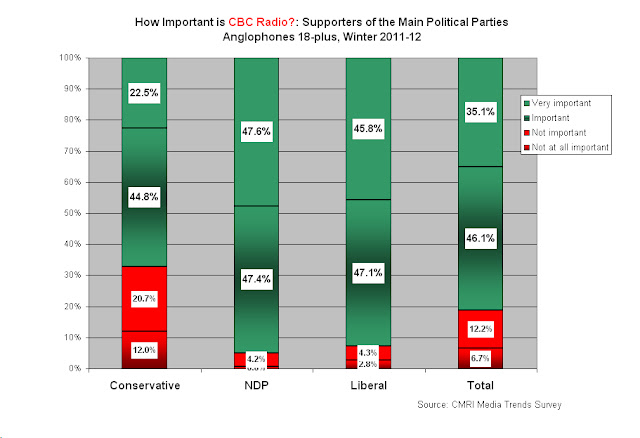 The Media Trends Survey probes deeply into the demographics, lifestyles and interests of respondents and a future post, if time and space permit, may examine the core group of Conservatives who don't support CBC. Clearly it is important for those interested in the public broadcaster to understand this phenomenon.

Comparisons are the very essence of all research; one needs a control group to test the effectiveness of a new drug so to speak, so comparing the ratings of other cultural organizations can be valuable. For example, support for CBC is very strong when compared to Telefilm. More than 1 in 4 NDPers and Liberals don't think Telefilm is important to our culture and this increases to over 1 in 2 Conservatives.  Telefilm, of course, doesn't have the same visibility as CBC and respondents may not fully understand its mandate but these results tell us something about both CBC and Telefilm. 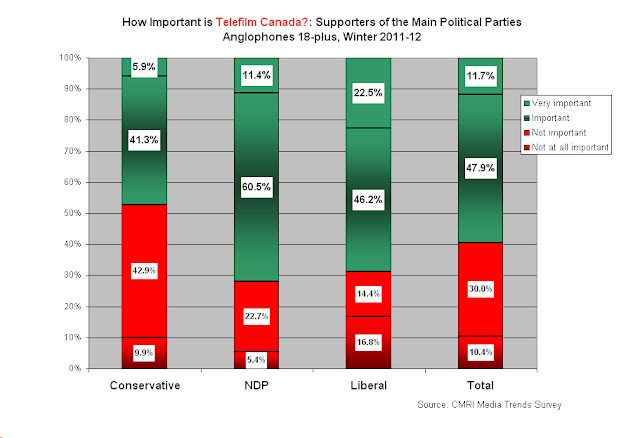 The 2011 results are from CMRI's Media Trends Survey conducted November-December 2011 among a representative national sample of approximately 900 Anglophone respondents aged 18-plus.  Margin of error +/-3.3%.  The Media Trends Survey has been conducted for ten consecutive years and has surveyed over 15,000 Canadians during this period.
Posted by Barry Kiefl at 14:27