CBC Must Abandon Ads And Find New Sources Of Funding

CBC has boasted that 50 per cent of the cost of its TV services is paid for by advertising revenue. No more.
In the year ending August 2015, CBC English TV ad revenue fell off a cliff and was barely $100 million, well under 20 per cent of TV revenues. Funding from taxpayers is now four times greater than ad revenues, an outcome that was predicted here.
Despite cuts by the Conservative government, a large increase in public dollars was required to balance the books of CBC TV in 2015, money taken from other areas, especially CBC Radio. To make matters worse the cost of selling ads and promotion on CBC TV represented $62 million last year. Administration costs, some of which are for sales, were another $78 million.
After deducting these overheads, there is no meaningful profit to be made from advertising, which begs the question: why is CBC still in the advertising game?
Even in years such as 2014, when ad revenue receievd a boost from the Olympics and World Cup soccer, the cost of buying the rights to such events all but wipes out any increase in ad revenues: expenditures on sports that year were almost half of all CBC TV program costs, over $230 million. CBC Radio and Internet services spent additional dollars covering these events.
So, again, what is the business case for the public broadcaster playing in the ad business? CBC suits will try to make the case, but will it be credible?
For decades and right up to 2012, CBC maintained that the ad revenues from NHL hockey were profitable and underwrote the cost of other programming. Only after losing the rights to the NHL in 2013 did a humbled CBC president admit that they weren't making money off of hockey.
CBC did once make substantial money from ads. Twenty years ago, adjusting for inflation, CBC TV generated almost half a billion in sales revenue, somewhat less in French TV, but those halcyon days are gone.
The measly revenue raised by CBC Radio is another case in point: ads were introduced two years ago and English Radio made the paltry sum of $1.2 million and French Radio less than $200,000 in ad revenues in 2015. The cost of selling and producing the radio ads far exceeds the revenue.
Ad revenues from CBC Internet digital services, such as CBC.ca, are apparently so embarrassingly low that they are folded into the revenues of TV/Radio or buried. CBC committed to increasing Internet digital ad revenue by 50 per cent, but it is still of such Lilliputian proportion it has never been publicly reported. Whatever revenue is generated, it is primarily at the expense of local and national newspapers, many of whom are at death's door.

"CBC desperately needs new direction, starting with board members who have a knowledge of broadcasting and are representative of Canada's younger demographics."

The situation in CBC French TV is no better. Ad revenues fell by 18 per cent in 2015, hitting a new low for the decade. For more in-depth information on French TV and radio, please visit my blog.
The most compelling reason for jettisoning ads from all CBC TV services, or at least dramatically reducing them, is that the ads are almost all the same ones that run on private stations.
Thus, the ads also advertise that CBC is no different than private TV, especially since slackening demand has meant CBC is reduced to airing repetitive ads for third-tier products and services. It has gotten so desperate that CBC only gets paid if you call the 1-800 number in the ads.
The second compelling argument for eliminating commercials is their effect on programming. Neil MacDonald (knowingly?) summarized it in an analysis piece, stating that traditional standards in news organizations have "given way to naked fear, as media managers, and not just in newspapers, desperately try to hold onto splintering audiences and plummeting revenue."
He reminded us that "news institutions must place principle ahead of metrics, or our core withers, and we become clickbait hustlers for corporate paymasters who would rather see stories about a Kardashian." MacDonald ends his piece giving his personal view, once considered a mortal sin for a CBC journalist.
One can't blame CBC journalists or other staff, whose salaries now comprise the lion's share of programming expenditures. CBC staff numbers have been reduced by 20 per cent since 2009 but inflation means salaries are now a much greater proportion of the TV budget.
No wonder so many panel discussions are comprised of CBC journalists talking to CBC journalists. This is a financial disaster waiting for future managers. The CBC Board of Directors is comprised entirely of non-broadcasters, all appointed by the last government, with an average age approaching 60.
This board is responsible for the policy to increase the number of ads and types of products and services that are advertised, and to spend more money on selling ads than the revenue generated.
This board is responsible for the current state of CBC journalism. More importantly, the board is accountable for the policy to reduce budgets for the most successful CBC services, CBC English and French radio, to support CBC TV, presumably because they are under the impression that CBC TV makes money from advertising.
The current board is never going to be able to right the CBC ship; more likely, they will sink it, given the time.
CBC desperately needs new direction, starting with board members who have a knowledge of broadcasting and are representative of Canada's younger demographics.
CBC is woefully short of the funding. As noted elsewhere, neither public nor private Canadian TV has sufficient funding to compete with programming from the United States, England or France.
An industry-wide strategy is needed to find new sources of funding and focus the efforts of CBC and private broadcasters. The misdirected CBC strategy to compete for advertising dollars should finally be abandoned.
A clean slate of board directors, with like-minded senior managers, should function like the boards of hospitals and universities and raise funds from the public and corporations to supplement government grants.
This should not be so difficult, since CBC, especially radio, still has dedicated viewers and listeners. 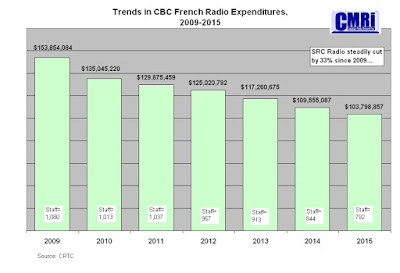 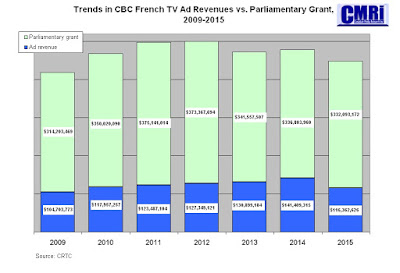 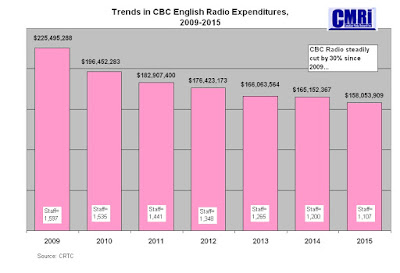