The CBC president pronounced  at a CRTC hearing last November that CBC radio had been largely spared from the budget cuts made by the  federal government in spring 2012.  Here's what he said to the CRTC Commissioners: "when you look also at whether... the television side or the radio side that gets most of the cuts, we actually also protected the radio piece to the tune of -- about 84 percent of the cuts went on the television side, 16 percent of our cuts went on the radio side."

CRTC implemented a new policy a while back that required all broadcasters, including CBC, to submit annual financial reports on their individual networks.  The CRTC financial reports are useful for understanding the revenues, expenses and staffing of CBC and other broadcasters.  The most recent report for the broadcast year ending August 31, 2012 contradicts what the president said at the CRTC hearing.

Here are some CBC English highlights in the CRTC financial data 2009-2012: 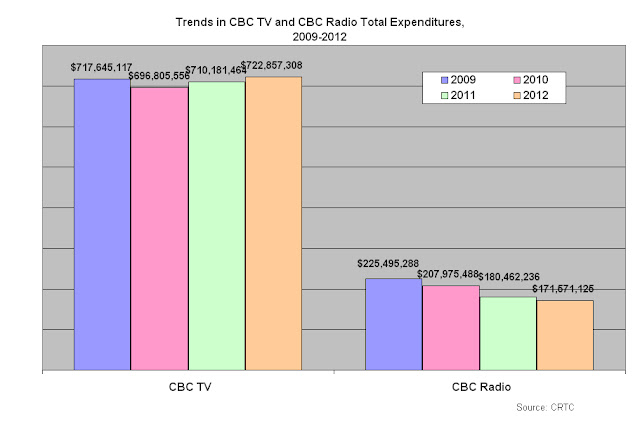 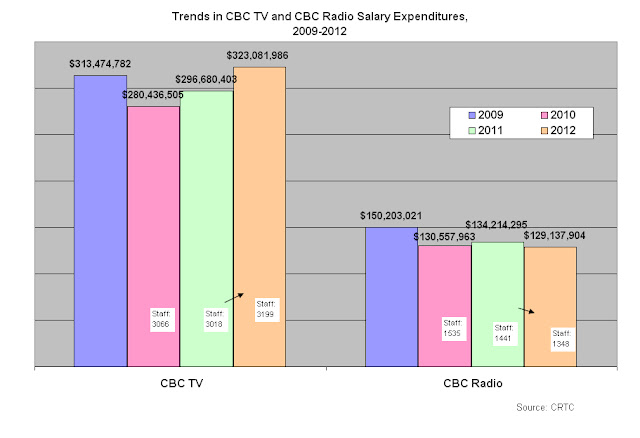 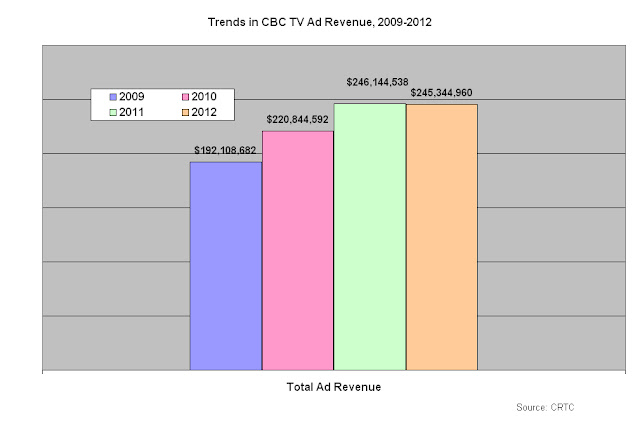 The watering down of CBC radio, including the transformation of Radio 2 from a classical music and arts service to a miscellaneous music mix, the 50% reduction in midday local programming, the numerous same week repeats of network programs, the cancellations of talent contracts for theatre critics, etc., the long periods in summer when regular programs consist of nothing but repeats, the reductions in the depth of radio news and reporting, the focus on low hanging crime news, sports, weather and traffic, have presumably all been done for one over-riding reason: to save money, money which is being used to support the CBC's television service.  The question is: whom did CBC management consult to make these drastic cuts: CRTC, government, Canadians?

Postscript:  There was no hint in CBC's 2012-13 Corporate Plan, presented annually to the government, that CBC ad revenues were flat.  In fact, the plan, which was issued in August 2012 and relates to the fiscal year rather than the broadcast year, stated:

"On the revenue front, CBC outperformed our target by 7 per cent, driven by incremental advertising revenue, largely from hockey playoffs, and a variety of other revenue items, such as program sales and facility rentals. Self-generated revenues continue to be an important source of funding for CBC."